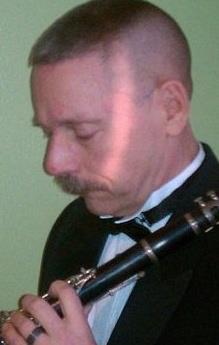 In the disastrous year of 2008, I suffered a devastating episode/stroke that left me senseless and helpless and very afraid. As the year passed by and recovery began for me, we moved into a new home and I began to look at my life, where I’ve been and where I was at that time. Taking a live evaluation, thinking my life was over, I finally went back to the thing I love most in life, playing the clarinet. Well, a disparity of thought at the time as I was just beginning to talk again in a perceptual way and was not totally functioning at the time, but I picked up the horns anyway and began a journey that I continue to this day. The first notes were insanely bad, squeaks, squawks and something horrendous. However, as I continued each day to do a little more, I began to get enthused, I had a focus point in my life again and something to train the brain to center and find that place of solace and solitude in the vibration of the reed against my lips and the wonderful feeling of accomplishment with each passing day. I did not have a physical therapist and being the individualist I am, pushed myself to do better and to figure out how to come back to a performance standard I dearly treasure.
Frustrations come and go, but I keep at it. Scales, Scales in Thirds (Thank You Dr. Gholson), Fingers and finger movement (Thank You Leon Russianoff), Musical Integrity (Thank You Alan Balter) and a wonderful discipline with attention to every detail of the practice and working through problems with the fingers and the vision (Thank You Mr. Marcellus). At the time, my eyes would not focus on the notes themselves and were still floating around the page and my thought processes were here and there. As time progressed, I became adamant with myself and pushed to achieve that focus of sound, timbre and smoothness of the tongue movement and the shape of the wind column, working very meticulously on even the slightest perception of imperfection in my playing.
Each day became a chore dealing with these issues, fears, anger at myself and other aspects seemed to be moving slowly, but with persistence I knew I could and would be a lot better. Suddenly, a flash of light went off in my pea brain and it occurred to me that the scales were becoming more commonplace to me and the etudes that I could hardly see were coming into focus, and thus began the major journey of recovery.
Disability, we are only disabled as we wish to be.
As a stroke Victor, The Journey Continues!

Welcome to the insane world of JK! I am so glad you decided to join me in exploring this whacky world we live in. This book will take you through the creative process and intricacies of a professional chef and how to create in your home kitchen.

What is a Redneck?

If You Let Him In Too Fast, Don’t Be Surprised If He Leaves Just As Quickly — Thought Catalog

The Travels of Anita Duchee’

Grace is not your average Lutheran church

Recent Posts: Behind The Ligature

My Touring Repertoire for 2016